Who was at the end of the line this year at Cannes Lions? – Weischer.Media presented the advertising Oscars in 2019, Scholz & Friends is the best German agency, and GoSee celebrates the Titanium Lion for 'The Uncensored Playlist' by DDB Berlin for 'Reporters Without Borders'

Glitter and glamour on stage at an entertaining award ceremony with presenter Steven Gätjen and host Florian Weischer, Chairman of Hamburg-based media company Weischer.Media, followed by an after-show party: Around 300 invited guests witnessed the ceremonial presentation of the “Oscars of Advertising” at Delphi Showpalast in Hamburg. Weischer.Media, the official German representative of the International Festival of Creativity in Cannes for more than 20 years, invited guests once again to the “Night of the Lions” in Hamburg where the German winners were honored and finally received their long-awaited Lion trophies, which they had won in Cannes in June.

A total of only 32 Lions (Gold, Silver, Bronze, and Titanium) were presented to the creatives. Two particularly valuable awards were among the coveted trophies: one Grand Prix and one Titanium Lion. “With the Titanium Lion and Grand Prix, our creatives demonstrate their ability to compete in the highest league of international creatives, even though the German agencies did better in Cannes last year,” Florian Weischer says diplomatically about the modest result.

One thing the evening made clear is that, at the moment, Germany's best advertising campaigns come from Berlin. Hamburg-based agencies, which received more Lions in Germany last year, only took home two lions this year. One Silver Lion went to the agency Publicis Pixelpark for the film '9.58 seconds', in which Puma's annual report was overlaid with the run of sprinter Usain Bolt – Forever faster: Puma. The other, a Bronze Lion in the Design category, went to the agency Mutabor for brand work commissioned by U-Werk Karoline.

The PR Grand Prix went to agency Scholz & Friends Berlin for a book project, indicating clearly that taxes for tampons are higher than for caviar or other luxury products.

The Titanium Lion was awarded to the creatives from DDB Berlin for “The Uncensored Playlist”. This project for Reporters Without Borders transforms texts of critical journalists into pop songs. For the first time ever, a campaign from a German agency was awarded a Titanium Lion. The best German agency with a total of nine Lions is Scholz & Friends.

At “Night of the Lions”, the best German advertising campaigns have been showcased for more than 20 years, and winners have been presented the coveted Cannes Lions. Because of its high standing in the creative industry, the Lions are considered the Oscars of advertising. The Lions are awarded in June of each year by a renowned jury at the International Festival of Creativity in Cannes.


CANNES LIONS 2019 is dead - long live CANNES LIONS, a quick look back on the marketing event of the year and an 8-minute video with impressions from the Palais de Festival on the Croisette from GoSee correspondent Rolf Scheider

Cannes Lions is kind of like Santa Claus – half of us, particularly the younger ones, still believe in it while older folks have their doubts. They moan and groan across social media but still can't seem to turn their backs completely to this nice, somewhat aged event. For some, it is a cherished tradition. Others do business more or less shamelessly around the event.

And they all wonder if anyone at all knows exactly what goes on behind the scenes, who's got all the jobs, who is sitting on the next big thing – the organizers most likely included. For everyone, it is hard to believe what can happen in only one week of advertising – and how all the gifts and awards can be distributed in such a short time without anybody getting the slightest glimpse of Santa.

The CANNES LIONS are and will always be an institution that you probably just have to see as as advertiser – at least once. Egos as big as yachts, names of the invited podium participants as dazzling as a Hollywood promo tour. How much the festival has changed can be seen if you have followed the event on site for decades like our GoSee correspondent Rolf Scheider. What started as a serious, white men's club, is now a festival which has opened up in parallel to society and to all relevant target groups. Women, actors, musicians, billionaires, wellness experts, pride activists, Scandinavians... everything is worth a headline, is perfect for a panel and is good for a Cannes Lion – and most importantly: worth hearing and communicating.

From an event originally designed as a competitive exhibition to define excellent advertising, the festival has developed to become a very special circus event in the positive sense of the word. Actor Jeff Goldblum, singer-songwriter John Legend, actress Laura Dern, singer Tom Odell, Wyclef Jean, and Camila Cabello were just a few of this season's attractions – which goes to show that even the less publicity-driven program was a must-see. Panels worth mentioning included: 'Who is the next generation of consumers? What happens with the Millennial consumers? How do we really want to connect with generation Z? What about the evolution of masculinity? What’s with border uprisings?' Or: 'What will happen in the LGBTQ community?'

Rolf Scheider filmed for us on site – here are 8 minutes with a few impressions from the palace. Enjoy!
27.06.2019 show complete article

featured by HelliVentures Filmproduktion : HelliVentures film production celebrates its 20th Early Bird in 2019 – and where else but Majestic Beach; we extend our congratulations to winner Julia Weichinger from GPN Global Production Network

GoSee presents a selection of photos from HELLIVENTURES Early Bird 2019, taking place each year at Majestic Beach during CANNES LIONS. Big winner this year was Julia Weichinger from GPN Global Production Network, just ahead of Karl Wolfgang Epple and Marie-Therese Humer, who really gave it their all – and received a nice consolation prize for their contribution.

The location at Majestic Beach is just as coveted as the Early Bird from Helliventures – and this year, they even managed to outwit the likes of Mark Zuckerberg, so they say : "We won back the pier in Cannes. Not because we have a better algorithm but simply because we have held our event there for such a long time; and that even longer than his company... what's the name again... has been around." Joachim Hellinger tells GoSee tongue in cheek. New German-ish in hashtags: #davidgegengoliath, #soulbeatsmoney, #europerules, #catchtheearlybird #helliventures

Of course, guests could just drop by – upon invitation – for brunch with music, breakfast, waterskiing, wakeboarding and lots of fun and good vibes. We have a couple of snaps for you on GoSee. 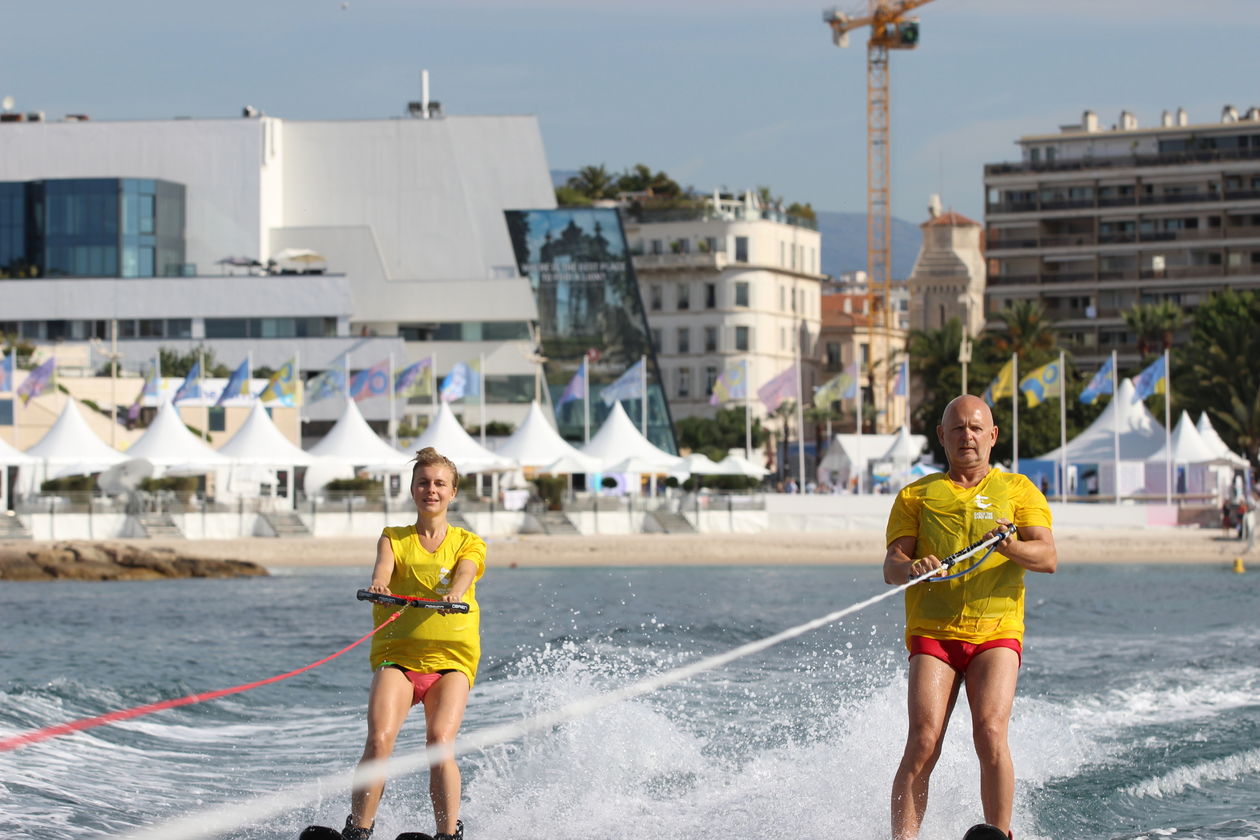