Leila & Damien DE BLINKK c/o EMEIS DEUBEL were chosen by the agency INNOCEAN to photograph the GENESIS GV 60 at night amid a spectacular laser installation.

Genesis is an automobile brand of the Korean Hyundai Motor Group. It was planned together with the midsize luxury sedan Hyundai Genesis and officially launched as an independent brand on 4 November, 2015. AUTO BILD ALLRAD has just honored the GV60 as Car of the Year in the Design category.

“The first-ever Genesis GV60 SUV is here to electrify expectations. With a striking design, a luxuriously modern personality and surprising technology inside and out, the all-electric GV60 is undeniable proof that the future starts at Genesis.” GENESIS.

It all took place in Portugal and was produced by 24/7 with post production by RECOM Farmhouse. 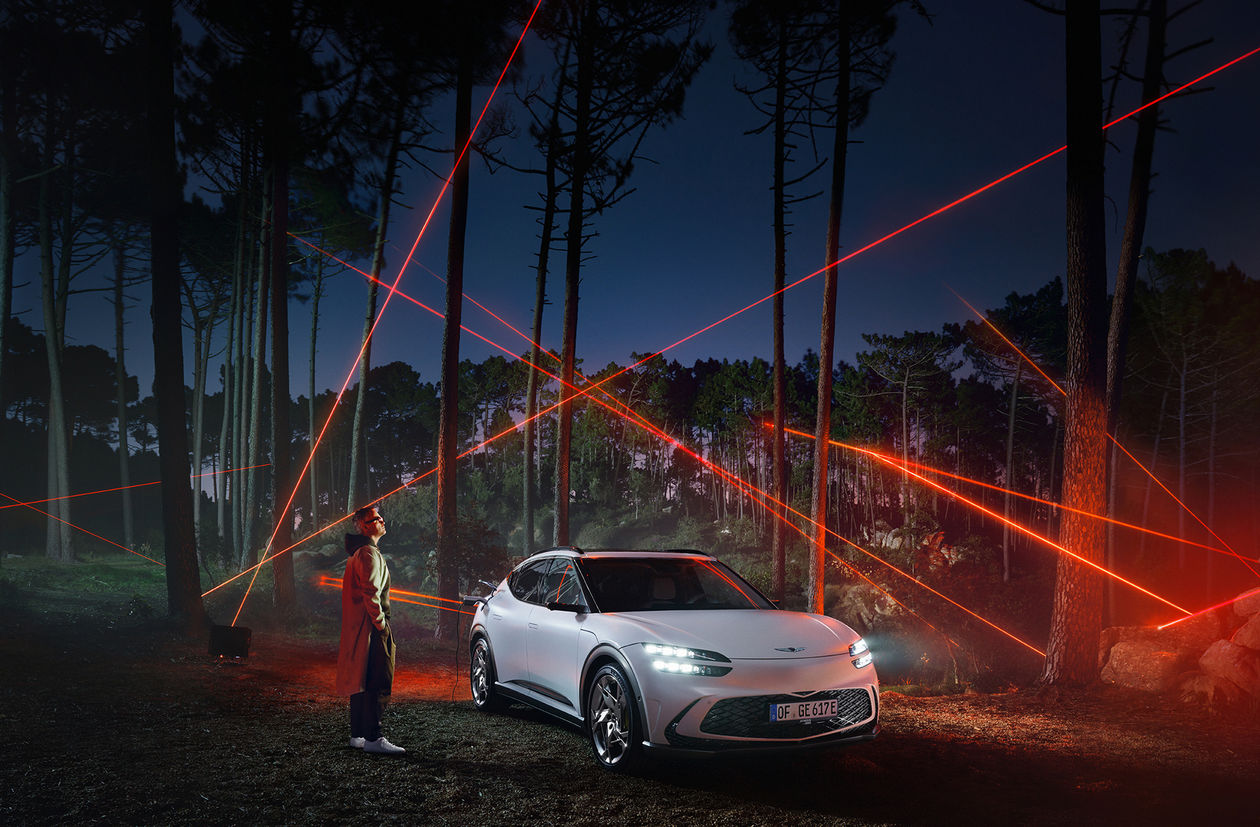 David Mendez is a symbol of grace, power, and pride for HORIZN STUDIOS, and in Indonesia for LINDENBERG HOTELS – photos by Robert RIEGER c/o EMEIS DEUBEL

“When David Mendez stood up on stage at his very first Berlin ball in 2016, he could finally breathe freely. At last, he felt seen. With his white shirt unbuttoned, his blue skinny jeans showing off his toned physique, and his hair tousled, he walked ‘All American Runway’, a signature ballroom category devoted to male fashion models. “I didn’t want to go on stage and immediately open myself up, to proclaim that I’m gay straight away,” the trained theatre actor and dancer tells me while catching his breath. We’re in Berlin on a bright but overcast day. Sporting a warm yellow shirt and soft gold chain accentuating his charismatic character, he moves through the city that opened doors for him years ago.” we quote Horizn Studios.

“In fact, expressing himself ‘without anyone saying that my style was too feminine’ – at the time, David was a seasoned house and hip hop dancer ‘in a male-dominated and homophobic scene’ – inspired a new journey of self-discovery. “It was normal for people to call things ‘gay’ or think that men shouldn’t wear high heels. I wasn’t openly gay and didn’t want to expose myself, so instead, I kept quiet and never fully integrated into the scene,” he says.

Six years on, the scale of David’s journey belongs, on the face of it, to an artist with boundless confidence. But the picture needs details, such as how he rose to fame as David Milan and the Father of the House of Milan at an impressive pace; how he tirelessly empowered himself and others; how he nurtured talent; how he simultaneously built a promising acting career. Go further, keep on going, and never give up. Chase your dreams. Be free.”

And who is HORIZN STUDIOS? “In 2016, we launched the world’s first luggage with a removable charging function. Three years later, we collaborated with NASA astronaut Alyssa Carson to give space luggage its world debut. In 2020, we coped with a global pandemic, which, as a travel start-up, has affected our community in unprecedented ways. Always forward-looking, in 2021, we were excited to further our sustainability journey.”


And for LINDENBERG HOTELS, Robert travelled to Indonesia where he had the honor of portraying the new hotel addition : ‘Lost’. LOST LINDENBERG is the fifth LINDENBERG project and the first in Indonesia : ‘In Pekutatan, where mountains explode and the sun blazes above the sea, a LOST LINDENBERG digs its roots deep into the sand. A hidden refuge on the vast west coast surrounded by temples, ruled by nature and the sacred spirits.” 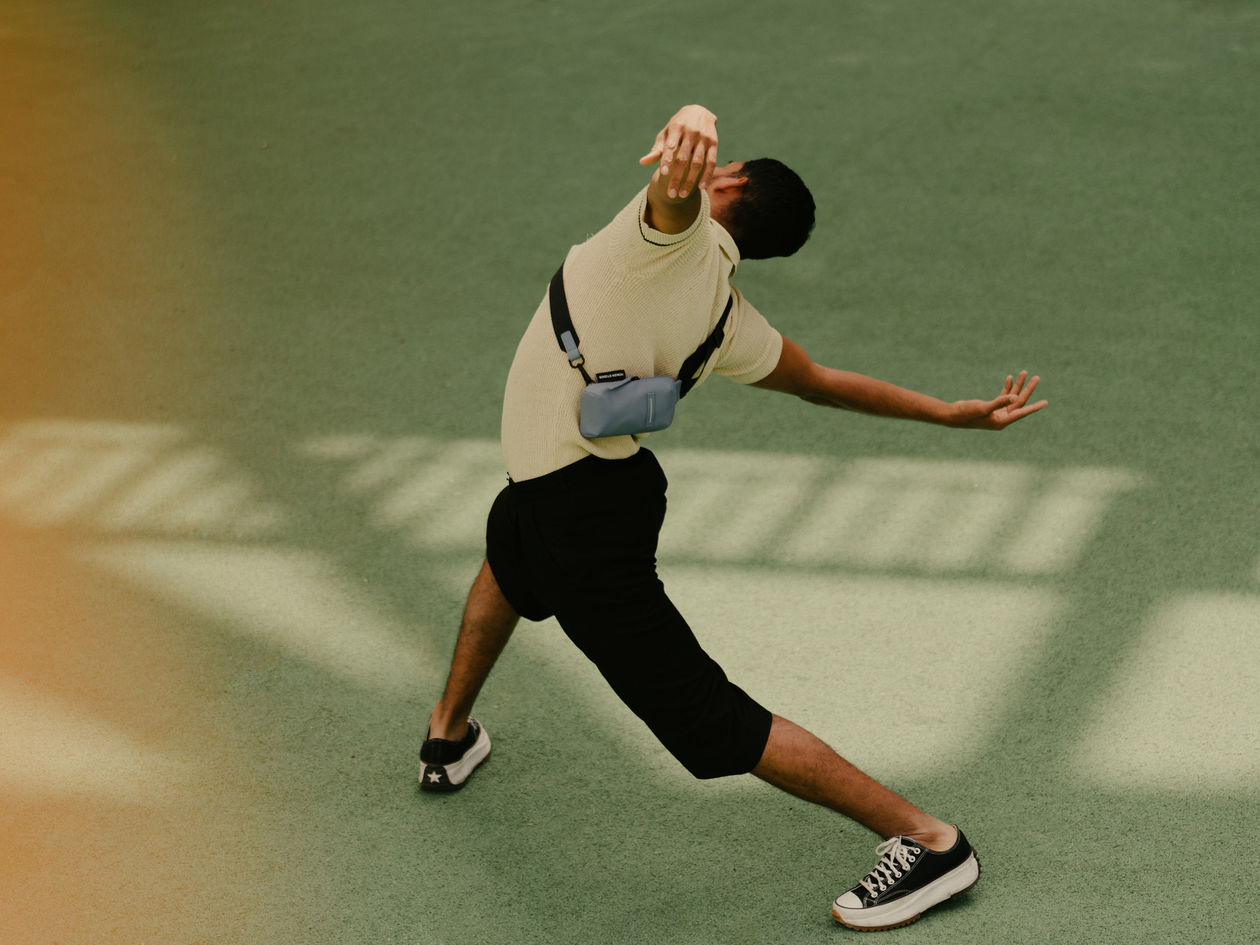 The first Astra without the juice – non-alcoholic and packs a punch. With Astra Granate Energy 0.0%, the iconic brand from St. Pauli wants to shake up the non-alcoholic market. What’s in it? 50% beer with 0.0% alcohol and 50% refreshing drink with pomegranate flavor plus guarana, taurine and caffeine.

“Benne OCHS c/o EMEIS DEUBEL was on the job once again for iconic beer brand Astra. This time, the campaign aims to promote the brand’s non-alcoholic beverage Granate, which is flavored with pomegranate.” EMEIS DEUBEL.

“We wouldn’t be Astra if we brought out just any alcohol-free beer: For us, it’s always a bit louder, more colorful, more exciting and more over the top. There’s no place for a classic non-alcoholic beer,” says Svenja Wohlers, Senior Brand Manager of Astra.

“We’ve been carrying the idea for Granate Energy 0.0% around the streets of Hamburg for some time now – it was always clear to us that we had to come up with a non-alcoholic product that the market hadn’t seen before,” says Gunnar Fischer, Managing Director Marketing at Carlsberg Germany.

The German beer brand Astra belongs to the Holsten Brewery, which has been a subsidiary of Danish brewery Carlsberg itself since 2004. The executive agency was Philipp und Keuntje GmbH.