Real Madrid’s soccer giants posed in their official BOSS suits for this high-profile shoot which is the result of yet another successful collaboration between Luminosa Production and JPPS Creative Productions. In the midst of an ongoing pandemic, shooting at Cuidad Real Madrid, the world’s largest club-owned training complex, was a great challenge – but also a great opportunity. Stills and video were once again shot by Paul McLean who was assisted by DOP Luke Glover.

HUGO BOSS : “Since 2015, BOSS has been the official fashion partner of Real Madrid C.F, the most successful soccer club in the history of the Europa Cup, which has also made a name for itself internationally. Real Madrid C.F. can look back on 34 Spanish championship titles (in what is referred to as the Primera División) as well as thirteen UEFA Champions League victories, four UEFA Super Cup wins, and seven FIFA Club World Championship victories. The team is now ready for its next big moment.”

Real Madrid is a professional Spanish soccer club based in Madrid. Founded on 6 March 1902 as Madrid Football Club, it has traditionally worn a white home uniform since the very beginning. The word ‘real’ is Spanish for ‘royal’ and was given to the club by King Alfonso XIII in 1920 together with the royal crown in the emblem. Real Madrid established itself as a major force in both Spanish and European soccer during the 1950s, winning five consecutive European Cups and reaching the finals seven times. GoSee: hugoboss.com//boss-herren-real-madrid & realmadrid.com
09.06.2021 show complete article 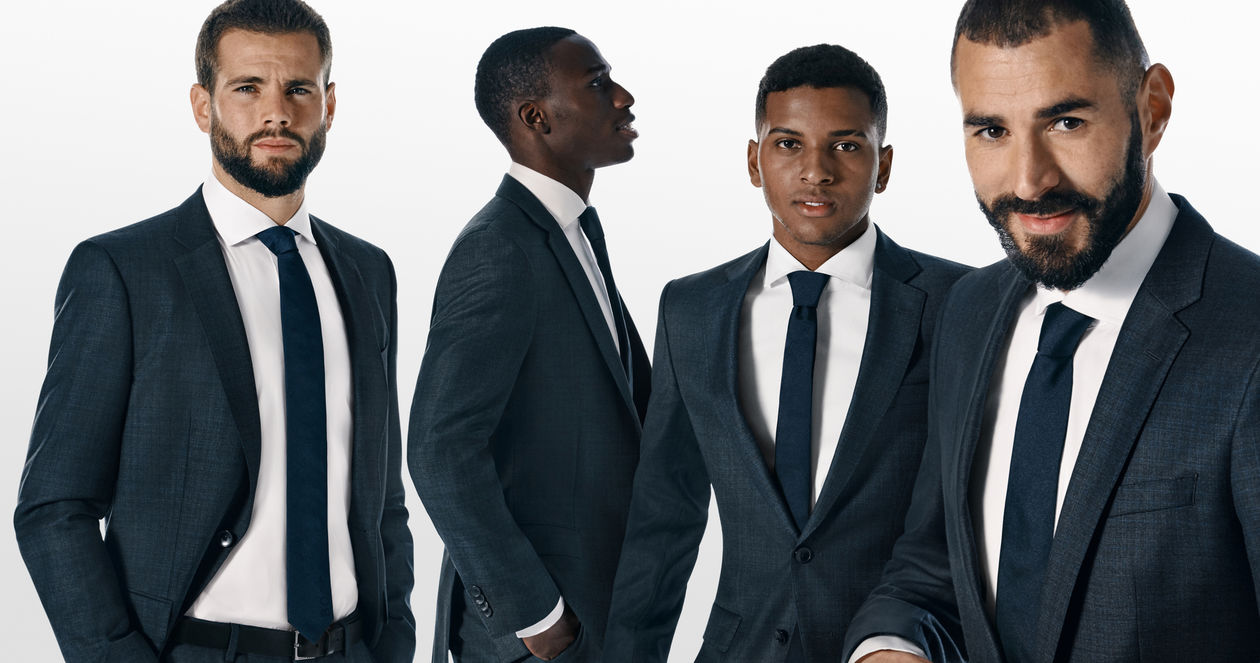 #teamBOSS – BOSS is the official tailor to several of the greatest international soccer clubs, including French Paris Saint-Germain. JPPS : “Efficient collaborative work between the two production companies Luminosa Production and JPPS Creative Productions has made this amazing shoot at Parc des Princes Stadium possible amid strict COVID-19 restrictions.” Stills and video came from Paul McLean with DOP Luke Glover at his side.

The Paris Saint-Germain Football Club, commonly referred to in the DACH region as Paris Saint-Germain or simply PSG, is a French soccer association from the Paris suburb Saint-Germain-en-Laye. The club has been French Champion a total of nine times to this day. It has won the French Cup thirteen times, and in 1996, the team won the UEFA Cup Winners’ Cup – making PSG one of the most successful soccer clubs in France.

On 4 August, 2017, Brazilian player Neymar Jr. was officially introduced as a new member of the team. The transfer fee set at 222 million euros paid to his former club, FC Barcelona, made Neymar Jr. the most expensive player in soccer history to date. Following the signing of Kylian Mbappé for 180 million euros that same month, two of the most expensive players of all time are playing for PSG at the moment. Owner of the club is Qatar Sports Investments.

BOSS : “Faith in their abilities comes before everything else. Paris Saint-Germain is the most successful French team in history and has been able to win 40 titles since it was founded in 1970. It is also the only club never to be relegated from Ligue 1 and is one of the only two French teams to win a major European title. The future of soccer belongs to PSG – and BOSS is proud to support the team during events with tailoring and casual outfits.” GoSee : hugoboss.com//boss-herren-paris-saint-germain


About - PSG. During its first three years of existence, Paris Saint-Germain Football Club was fan-owned and had 20,000 socios. The club was run by board members Guy Crescent, Pierre-Étienne Guyot and Henri Patrelle. A group of wealthy French businessmen, led by Daniel Hechter and Francis Borelli, then purchased the club in 1973. PSG changed hands in 1991 when Canal+ took over and then again in 2006 with the arrival of Colony Capital. Tamim bin Hamad Al Thani, ruler of Qatar, has been PSG’s owner since 2011 through the state-owned shareholding organization Qatar Sports Investments (QSI). This means that PSG is one of only two state-owned clubs in the world, along with Manchester City. As a result, PSG is also one of the richest clubs in the world. GoSee : psg.fr
10.05.2021 show complete article

‘I will’ – JPPS produced the UNDER ARMOUR campaign with judoka and ten-time World Champion Teddy Riner. The shoot took place in two locations: INSEP (France’s Olympic and Paralympic training center for international athletes) and a private villa just outside Paris. Clad in Under Armour from head to toe, Teddy owned the floor during the shoot by Lucho Vidales.

Teddy Pierre-Marie Riner is a French judoka. He has won ten World Championship gold medals, the first and only judoka (male or female) to do so, and two Olympic gold medals. He has also won five gold medals at the European Championships. He was a member of the Levallois Sporting Club before joining Paris Saint-Germain in August 2017.

Teddy Riner was born on 7 April, 1989, in Les Abymes near Pointe-à-Pitre, Guadeloupe, an insular region of France in the Caribbean. He was raised in Paris and was enrolled at a local sports club by his parents, where he played football, tennis and basketball, but says he preferred judo, “because it is an individual sport, and it’s me, only me.” He is 2.04 meters (6 ft 8 in) tall and weighs an impressive 136 kilograms (300 lb). GoSee : underarmour.com////teddy-riner-only-way-through
29.03.2021 show complete article