The American girl group drought is officially coming to an end. They’ve racked up hundreds of thousands of streams, millions of views on YouTube, toured arenas across North America, and received praise from the likes of everyone from Ariana Grande to Meghan Trainor – and they haven’t even released original music…until now. TIGHTROPE PRODUCTION has just produced the new album artwork for the girls band CITIZEN QUEEN. The photographer was Connor Franta, with styling by Jaclyn Fleurant.

Meet Citizen Queen, five supremely talented female vocalists – Kaedi Dalley, Hannah Mrozak, Cora Isabel, Nina Nelson and Kaylah Sharve – diverse in vocal style and background, but united in their mission to carry the torch as the next generation of girl group excellence…and have a damn good time together while doing so. From those introductory days spent together working in LA, the instant chemistry between the members made it clear that the group had potential far beyond those first few covers.

“You don’t have to be perfect to be a f—kin’ Queen,” says Hannah.

“We knew we had something. Some magic,” says 20-year-old female bass singer Kaedi Dalley who grew up in the Bronx singing in school and church choirs before being accepted into the acclaimed A Cappella Academy for three years. Their stories as up-and-coming creatives differ drastically: from 22-year-old Hannah Mrozak, the group’s mezzo-soprano, who started performing at department stores and coffee shops as a kid back home in Milwaukee, to the group’s youngest member, Cora Isabel. The 19-year-old beatboxer alto who grew up in Missouri explained, “My only experience before was growing up in my church singing, and being in a bunch of theater musicals.”

Nina Nelson, the group’s 22-year-old soprano, grew up in the Bay Area in a household with singing parents. She was attending the University of Southern California for acting and songwriting when she was accepted into the university’s prestigious SoCal VoCals – which eventually led to her being scouted for Citizen Queen and, like the other girls, leaving school to follow her dreams.

Kaylah Sharve, the 22-year-old Louisiana-born, Houston-bred alto, found her way to Los Angeles after growing up singing in church and in musicals. Having already forged an early path of her own in music, she enlisted in USC’s Popular Music program, hailed by Rolling Stone as “the site of Los Angeles’ most productive new music scenes,” and she eventually joined the SoCal VoCals alongside Nina.

The group debuted in late 2018 with their astounding cover of Ariana Grande’s “No Tears Left to Cry,” and their suspicions were confirmed after nearly two million views: there was magic, indeed. “I remember being so antsy. I’m not good at keeping things in, and we had to wait so long. We were just like ‘Finally!’” Hannah exclaims while reminiscing about their debut.

By 2019, Citizen Queen was touring arenas – and suddenly, the girls went from boot camp sessions to performing in front of tens of thousands of people, all while balancing their school duties. Cora even missed out on her high school graduation ceremony. (Touring the country as a pop star sounded like a better idea.) “We were just thrown into it,” Nina recalls.

“We had not known each other that long. It just goes to show that we’re a match. This was nine weeks straight, in an eight-person bus, and we had to get to know each other and give each other space. Team bonding – let me tell you,” she adds with a collective laugh from the group. “We were on another level. Junk food the whole time,” Hannah adds.

More covers came that year, including their harmony-filled takes on Daniel Caesar and H.E.R.’s “Best Part,” Shawn Mendes & Camila Cabello’s “Señorita” and Lizzo’s “Good As Hell,” continuing to win them more fans along the way – but something even more ambitious was just on the horizon. Citizen Queen’s growing popularity led to more frequent talks with their label, RCA Records – not just about their successful covers and performances, but the inevitability of original music. “Obviously, I loved the arrangements, but I didn’t want to be a cover band,” Kaylah admits. When it became clear there was potential to do more than just covers, they all leapt at the opportunity. “It felt like a dream,” Hannah remembers.

To carve out their own sound, the girls were sent to songwriting camps, which led to their eventual meeting with Justin Tranter, one of the generation’s premiere pop hit-makers, responsible for smashes for the likes of everyone from Selena Gomez to Britney Spears or even Justin Bieber. “We were in the middle of this songwriting camp, in the studio with these amazing producers and songwriters. They were all good songs, but none of them rang true to the embodiment of us yet,” Kaedi recalls of the events leading up to meeting the acclaimed songwriter.

After having a candid conversation with Justin about the themes they were passionate about, including self-empowerment “and just being a bad bitch,” Kaedi adds, they cooked up a fierce rallying cry that brought it all together for the first time: “Call Me Queen.”

“The first time we all listened to it, we all just kind of perked up and said, “Oh yeah!” Kaedi says. “It was definitely the start of something great.” At the heart of Citizen Queen is a diverse group of empowered young women, passionate about using their voices to represent strong women everywhere.

“If you want to change the media, you have to start with the people creating it,” Nina explains, including the importance of their team behind the scenes, from the engineers to the songwriters and producers. Teaming up with NOVA Wav, the female production duo who’ve already put a dent in the pop music industry with their contributions to Ariana Grande’s Thank U, Next and Beyonce & Jay-Z’s collaborative record as The Carters (Everything Is Love), was pivotal in the process. “They were so welcoming, and extremely collaborative. No idea was ever a bad idea,” Kaedi explains. And it’s that exact sentiment of inclusion that underscores the very meaning behind their name.

“A Queen is someone you look up to – it’s unattainable, but why does it have to be?” Nina says. “There’s something in every one of us, so why can’t we democratize the term and make it available for everyone? What’s inside you makes you a Queen.” The group stresses that they’re about authenticity, first and foremost, and have no interest in manufactured uniformity.

“Girl groups from the past were perfectly crafted, all wearing the same thing. I think it’s slowly been moving towards being more individual,” Nina says. “Our choreographer recently called us a ‘crew.’ I think that gives us a different energy. I think that sets us apart.”

“We want to give a gentle shove to any young girls or boys or whomever. Hopefully it gives them a surge of confidence…we also want to be voices for people who are afraid to speak up on their own. Everyone,” Hannah says. Armed with an air of infectious confidence, undeniable talent and an arsenal of slickly produced, superbly sung R&B-laced pop bangers and ballads in waiting, the girls of Citizen Queen are now the next ones in line, poised to take their rightful place on the throne. 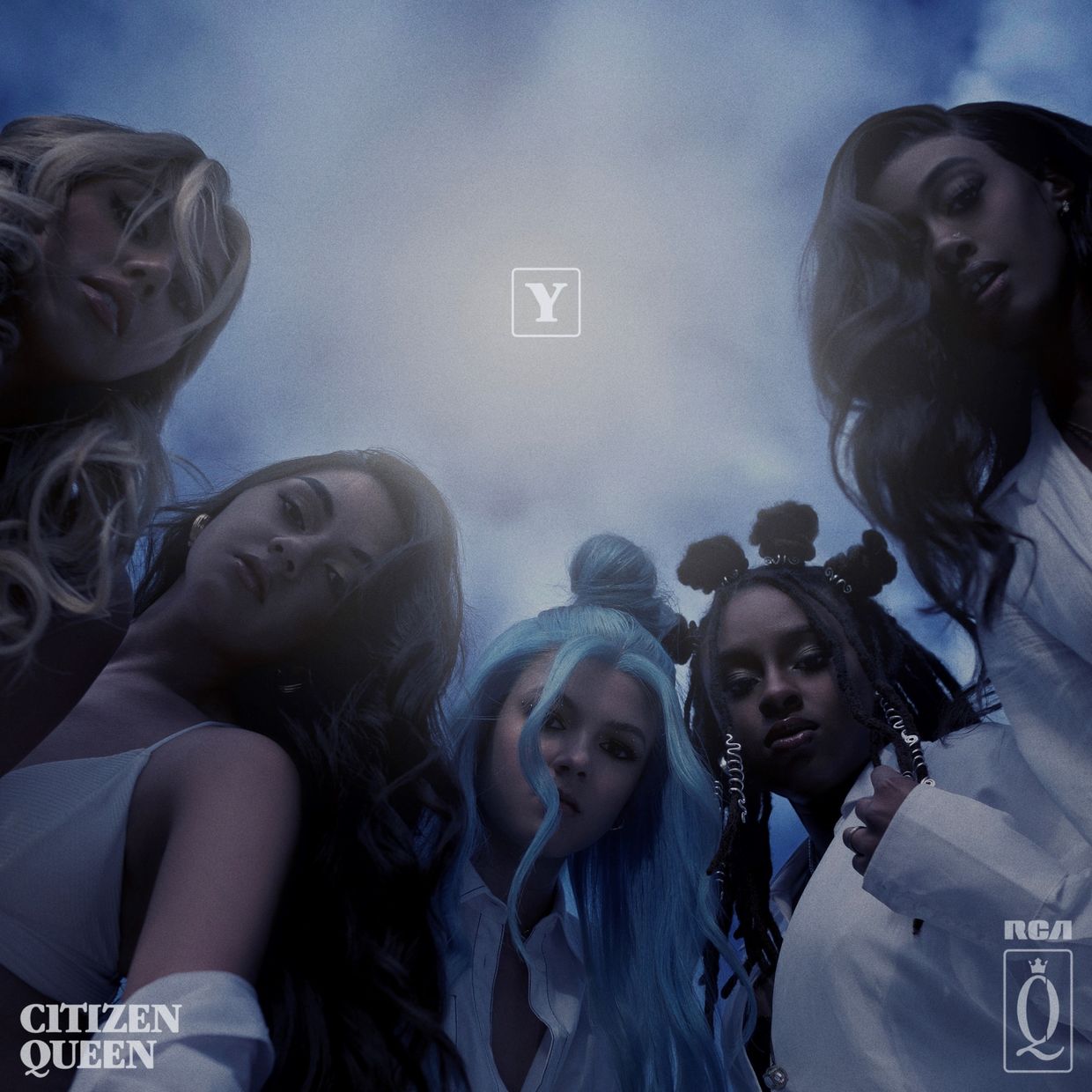 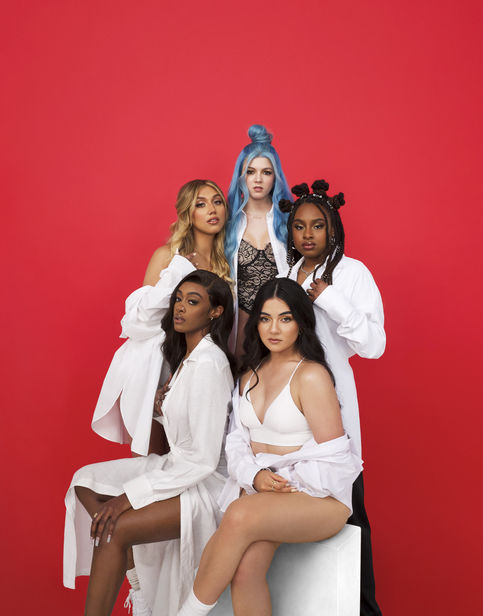