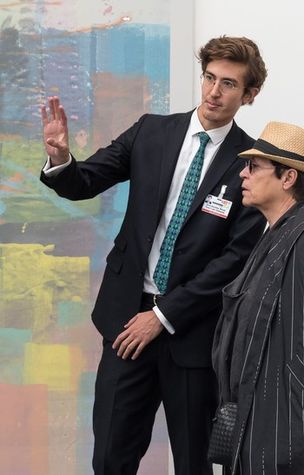 IMAGE // GALERIE THADDAEUS ROPAC : Nick Buckley Wood
David SALLE | 21 Jan - 25 Feb 2017 | Galerie Thaddaeus Ropac Paris Marais
Galerie Thaddaeus Ropac is pleased to announce the upcoming solo exhibition of David Salle, comprising a series of paintings on canvas and paintings on paper. Immediately eye-catching, these new works combine a vibrant palette with a dense and dynamic composition. Salle juxtaposes shapes and heterogeneous images that link the photographic to the painterly, while creating disruptions between black and white areas and bold colour tones. As a whole, the painting gives the impression of a visual collage and marks a step forward in the development of the American painter’s practice.

“Ever since I started painting, I have tried to get the fluidity and surprise of image connection, the simultaneity of film montage, into painting.” (David Salle, 2003)

Following this new impulse, David Salle explores a more direct and gestural relationship with the very matter of painting and colour, to the point of freeing it from all forms of representation. The works on paper are originally based on enlargements of 1960s Life Magazine pages dating back from the artist’s youth. David Salle then paints on it until the source image disappears. Although David Salle’s practice generally relates to figuration, these new paintings clearly show his long-standing interest in a principle of equivalence, or even reciprocity between images and abstraction, between the motif represented and the means by which it is accomplished. The artist explores the tacit link that binds our gaze to the image. His visual vocabulary eventually leads to absurd relations and initiate a dynamic, autonomous of any convention. The process gradually gives elasticity and lightness to the pictorial space until the different layers of our collective consciousness are revealed. The recent paintings are imbued with irony and, as the artist says, “make vivid the strangeness of being alive today”.

David Salle was born in 1952 in Norman, Oklahoma, and grew up in Kansas. After studying at the California Institute of the Arts (CalArts) in the 1970s with John Baldessari, he became, in the 1980s, one of the protagonists of figurative painting of the New York art scene. Since his first museum exhibition at the Boymans-van Beuningen Museum in Rotterdam in 1983, David Salle has never stopped exhibiting in public institutions. This was followed by the Whitney Museum, New York; The Museum of Contemporary Art, Los Angeles; The Museum of Contemporary Art, Chicago; The Stedelijk Museum, Amsterdam; The MoMA Vienna; The Menil Collection, Houston; Dallas Contemporary, Dallas; Haus der Kunst, Munich; Tel Aviv Museum of Art; Castello di Rivoli, Turin; The Kestner Gesellschaft, Hannover and the Guggenheim in Bilbao. He has participated in numerous international exhibitions such as Documenta 7 (1982), the Venice Biennale (1982 and 1993), the Whitney Biennial (1983, 1985 and 1991), the Paris Biennial and Carnegie International (1985). In fall 2016, the Center of Contemporary Art, Malaga, dedicated a solo exhibition to his last 25 years of creation.

His work is currently exhibited as part of Painters’ Painters at the Saatchi Gallery in London. His book 'How to see, a collection of art essays', has just been published by W. W. Norton, New York. David Salle lives and works in Brooklyn, New York. © // 1 file show complete blog 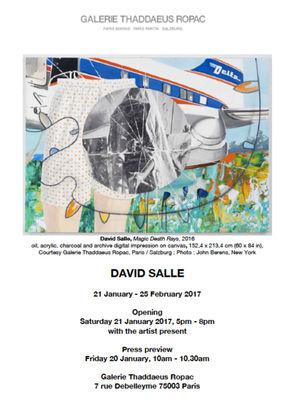 IMAGE // GALERIE THADDAEUS ROPAC : David SALLE at Galerie Thaddaeus Ropac Paris Marais
GALERIE THADDAEUS ROPAC TO OPEN IN LONDON IN SPRING 2017
We are delighted to announce that Galerie Thaddaeus Ropac London will open in Spring 2017. The gallery will be located at Ely House on Dover Street, in the heart of London’s Mayfair. An outstanding 18th century mansion, Ely House was built in 1772 to serve as the episcopal residence for the Bishops of Ely before being reinvented in 1909 as the home of the Albermarle Club.

Spread over four floors and 1,500 m² (16,000 ft²), Ely House will provide four distinct gallery spaces. The restoration of the rooms and galleries will be overseen by the New York based architect Annabelle Selldorf. The gallery will be led by Polly Robinson Gaer. Despite the recent result of the EU referendum in the UK, we have no doubt that London will continue to be one of most vibrant and quintessential art centres in the world.

We will share details of our opening exhibition programme later this year, and we look forward to welcoming you to Galerie Thaddaeus Ropac London in Spring 2017. © // 1 file show complete blog 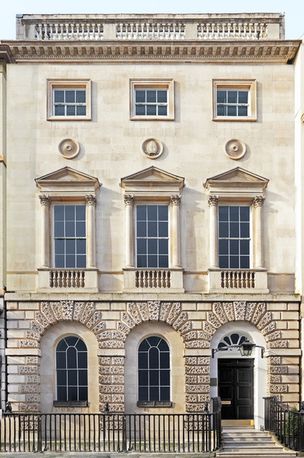