Two of them being only 5 years old, these mini fighters cause a buzz in their communities. SPARBAR® brand founder and CEO Jasvinder "Jazz" Gill says: “Those kids are just on a different level. They are destined to be champions, and we are proud to be part of their story.”

To support the SPARBAR® kids & youth talents, the Company brand provides them not only with  innovative training equipment; each talented youth athlete’s guardian receives shares in the Company – in their name - in trust for their future.

See here 12 future superstars to watch out for:

1) Prince ‘The Buzz’ Larbie (age 8)
There’s a strong force coming from Ghana, Africa. More precisely, from Ghana’s hometown of boxing champions, Bukom in Jamestown “I'm from a small community called Jamestown. In Jamestown, we have two choices in life. Football or boxing. A boxer is what I've become,” says 8 years old Prince ‘The Buzz’ Larbie, who was voted 2020 Best Juvenile Boxer by the Boxing Writers Association Ghana.
Prince has been immersed into boxing with his dad being a boxing coach and former pro boxer. His hometown of Bukom is only the size of 2 soccer fields, packed with 40 boxing gyms and has produced 6 world boxing champions. Boxing may very well be in Prince's DNA, but his boxing IQ and sparring skills are at a next-level. A BBC documentary about Prince went viral, and he does not only have the whole nation of Africa behind him, but the international community and team of the SPARBAR® brand.

2) Caden ‘The Tornado’ James (age 5)
This speedy boxer from the UK known as “The Tornado“ got discovered by SPARBAR® founder Jazz on Instagram: “We got excited seeing this power and technique at the tender age of 5.”
Caden is known in his home town Sheffield for his 7 world records, largely given for the speed of his punches. He is now trained by Olympic medallists and World Boxing Champions such as Robin Reid out of Manchester, and became one of the youngest Brand Ambassadors at SPARBAR®.

3) Jayden ‘The Predator’ Price (age 9)
9-year-old Jayden ‘The Predator’ Price used to be quiet in school, and his mum wanted to build up his confidence by sending him to a Brazilian jiu-jitsu course. The great talent now ranks no 1 in BJJ in the UK, earning two World Champion and three National Champion titles. His love for combat sports quickly extended to boxing and MMA, and Jaden was a natural on the SPARBAR® Pro right away.

4) Rianna ‘Tank’ Doforo (age 13)
13 year old Rianna ‘Tank’ Doforo from Liverpool, UK, has always been a very athletic, powerful kid. She found her passion in sparring, and now dedicates 9 training sessions per week into boxing. “Her confidence and self-belief have gone through the roof when she picked up boxing,” her parents say about her training.
With the SPARBAR® Pro, she continuously improves her hand speed and reflexes. Rianna trained at the Mayweather gym in Vegas and was chosen a Junior Ambassador by WBC (World Boxing Council) for not only performing outstanding boxing skills, but using her voice for anti bullying and kindness.

5) ‘Lethal’ Lilly-May (age 17)
A force to be reckoned with, 17 year old British ‘Lethal’ Lilly-May started boxing when she was 9 to build her self-confidence after having to go through bullying at school. Now she trains 6 days a week at a sports college, has won a national title, and is simply loving her life working towards her goals to become a professional boxer, undisputed champion and go to the Olympics.

6) Cee-Jay Sheelan (age 9)
9 years old Irish Cee-Jay Sheelan is into all of the Martial Arts since he was 4. At only 5 years old, he started competing nationally and internationally. “He always wanted to fight,” his dad recalls. Cee-Jay won the Irish Kickboxing national title twice at 2 different weight classes, and now added MMA to his training program. He sees the SPARBAR® Pro as his “gaming console”.

7) Klayton Bonas (age 5)
At the age of 3, Klayton’s dad got him a pair of gloves and pads to mess around with in the house, and li’l Klayton did not stop boxing a day ever since. UK boxing gyms made an exception on their membership age-restrictions and asked to bring in now 5 year old Klayton Bonas when they saw his natural ability in social media videos. Klayton loves sparring, and SPARBAR® boxing fitness equipment gives his dad a break. After their daily sessions, Klayton loves to watch his heroes Floyd Mayweather, Ryan Garcia and Paquiao.

8) Jaya AKA Jayweather (age 11)
Youth athlete Jaya AKA Jayweather started boxing at the age of 7. Growing up Jaya was more interested in Power Rangers than barbie dolls. At the age of 6 Jaya started Karate, and with her dad's love of the boxing sport was encouraged to start boxing. From the moment she first walked through the boxing gym doors her boxing coach saw great potential in her. From being a shy little girl Jaya walked into a boxing gym full of men and made to feel a part of the family. Now filled with confidence, Jaya has already competed in 3 fights. This girl has the drive and dedication to go far and reach her dreams of winning gold medals and belts.

9) Serena Mali (age 11)
11-year-old fighter Serena Mali got discovered by the SPARBAR® team from articles and posts her head coach released to tell the UK about her abilities. Being one of two girls in the local boxing gym, her head coach reports she is “showing the mentality, character and skill-set needed to be a top boxer.” Serena has always been on the athletic side, trying out every sort of sport before she dedicated herself into boxing. She now trains 5 times a week towards her goal to become a pro boxer and to go to the Olympics.

10) Nicholas Lecointe-Akore (age 16)
UK-based Nicholas Lecointe-Akore got into Brazilian jiu-jitsu for a year, and won Gold in the BJJ English Open Championships when he was 13. He swapped to boxing right afterwards, and now his coaches prepare the now 16-year-old to become a National Champ and a Junior Olympian. Nicholas loves sparring. His father, a martial artist and boxing coach himself, reports: “He's determined when he fights.”

11) Tyler James “Taekwondo Kid” (age 9)
“Taekwondo Kid” Tyler James kicks the SPARBAR® seven days a week because he knows he's soon going to rock the Olympics in Taekwondo. He started taking lessons as a 4-year-old and just never stopped training, taking home a 2019 National Champion title and being #1 in Taekwondo in his home country the U.S. in his age and weight group. "The sport has boosted his confidence, and he's not afraid to talk to people like he used to," his father reports. Taekwondo also helped Tyler keep his mind busy as he coped with the loss of his mother at age 6. Great kicks come with great style: Tyler's hair comes in different colors on TikTok and Instagram. "A mohawk we do with coloring hair wax that you can wash out," his father lets us know.

12) Jasmine Paul (age 9)
A kickboxer, tennis player, runner, and overall athlete, Jasmine enjoys all sorts of sports since she could walk, and started collecting medals and awards for her outstanding athletic performances from the age of 3. Coming from an active family, her biggest cheerleader is her sister Roxanna, 4, who now joins her on her 6 days a week training sessions.
When she's not on long-distance running tracks, perfecting her tennis game, or competing in kickboxing all over the UK, she's kicking and punching the SPARBAR® Pro in her home gym together with her family. Her first contact with the brand was at a SPARBAR® Kids Ambassador Day in the UK, where she was inspired by meeting other super sporty kids and teens.

Jazz about the SPARBAR® talents: “Our talent scouting is truly social-driven. Many fighters come from a tough background. We aim to support kids that choose boxing and sports to overcome adversity, and get the most out their life.“ The SPARBAR® team hosts global Ambassador days, where the junior talents meet World Champions.

The original SPARBAR® products are available at sparbar.com and at retailers listed at this website. 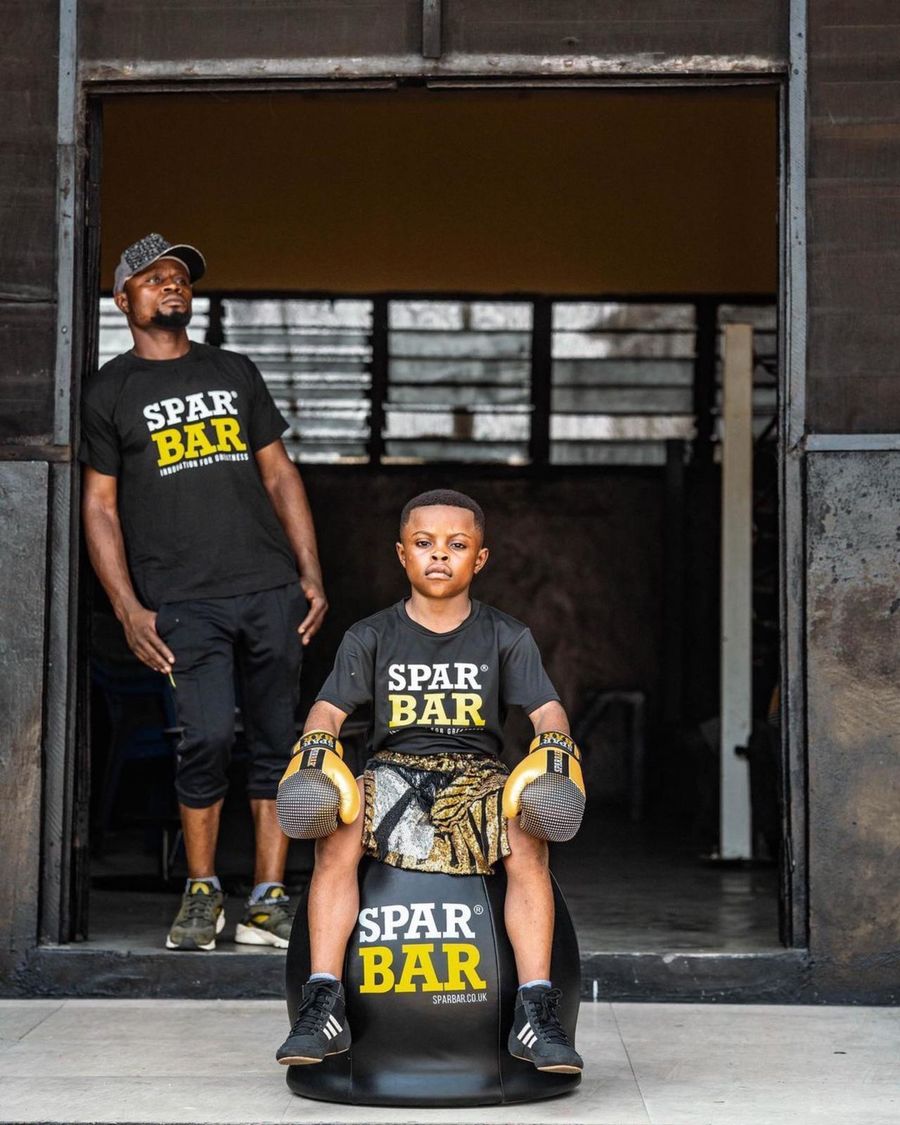 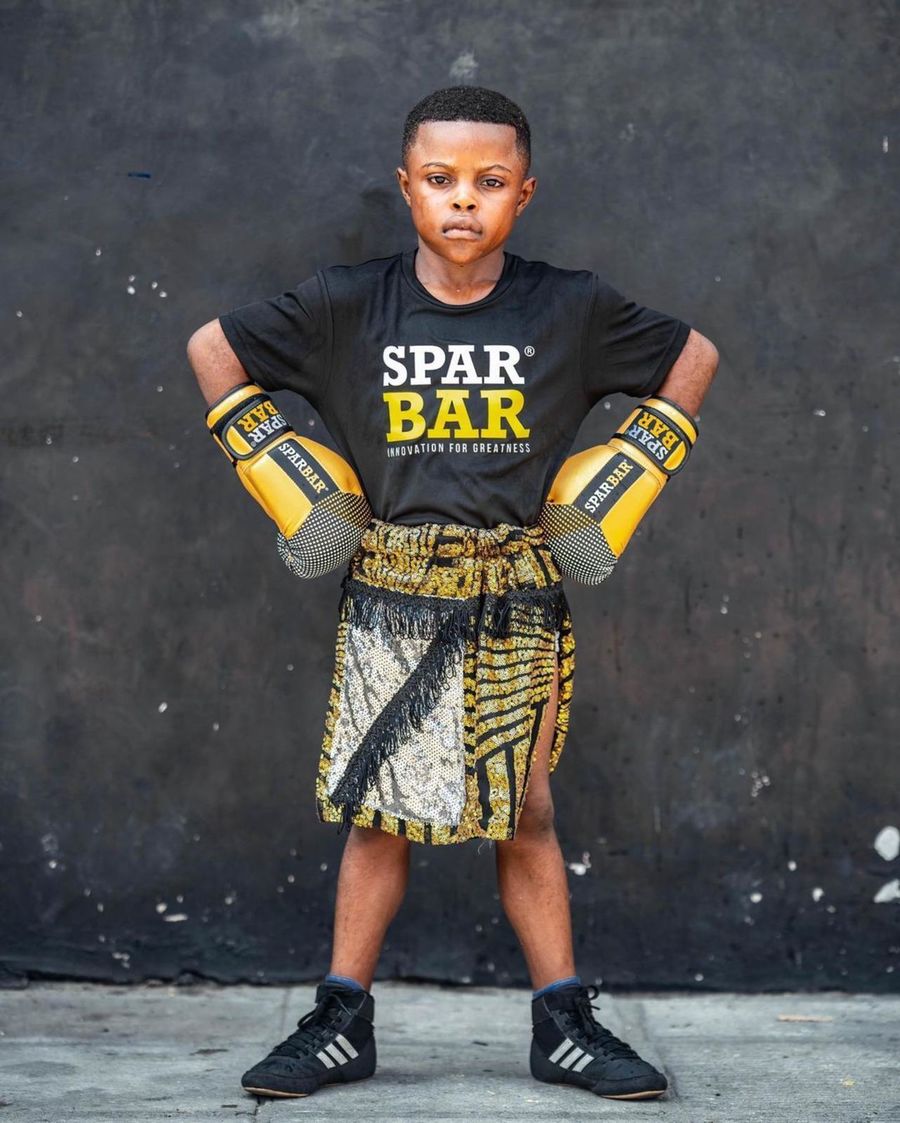 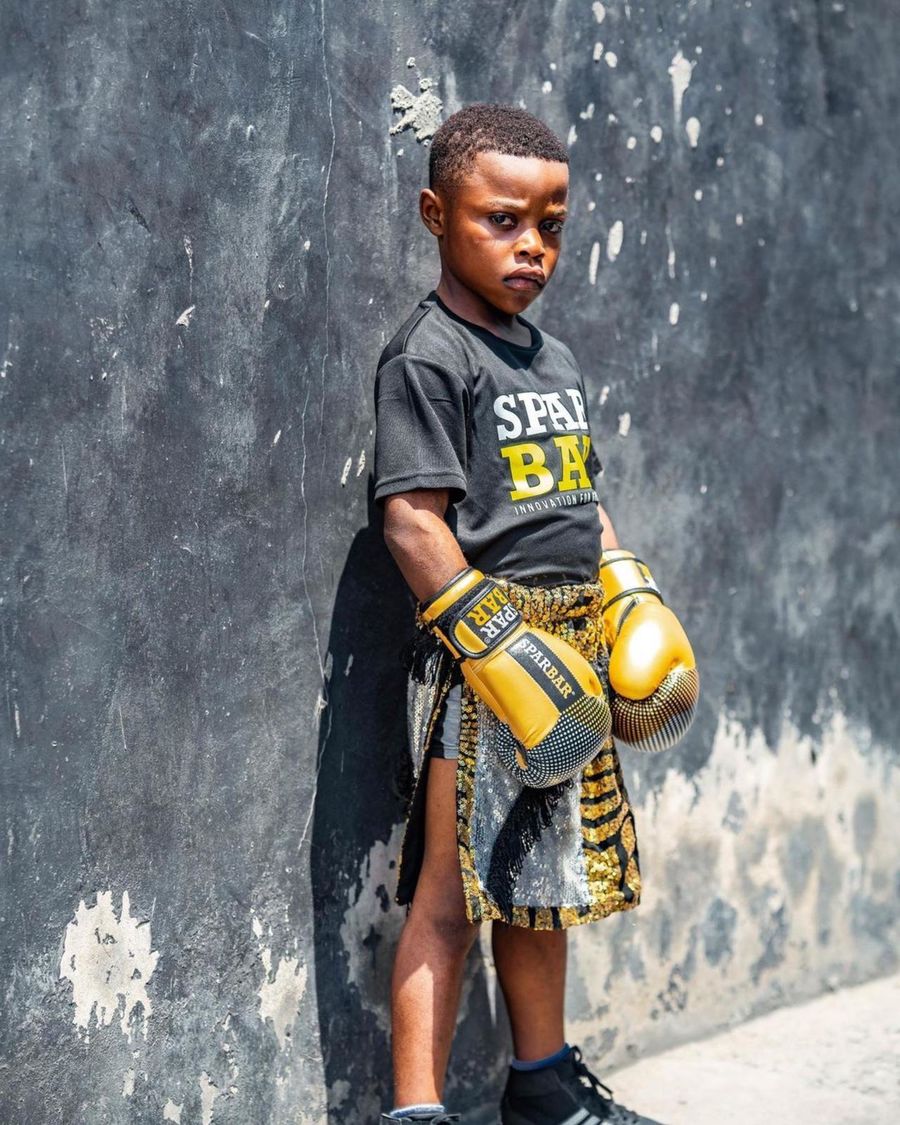 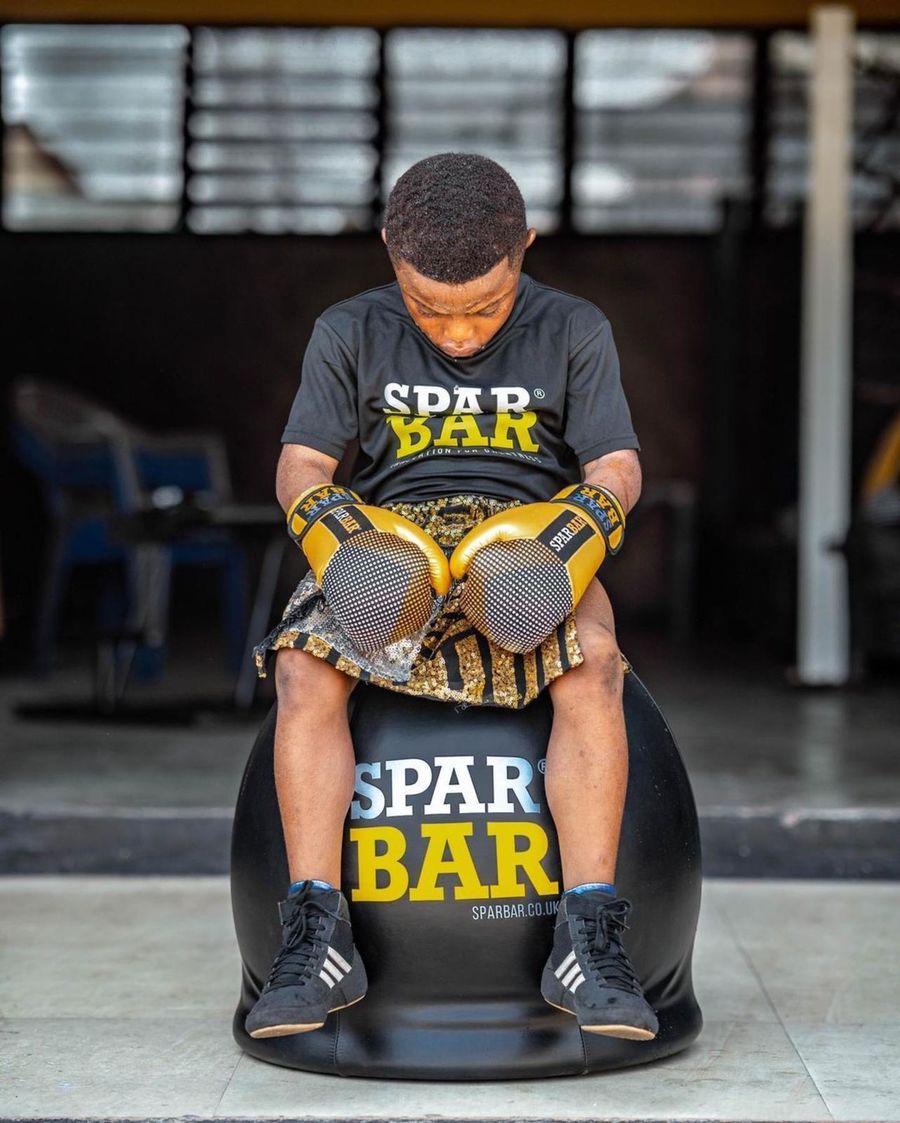